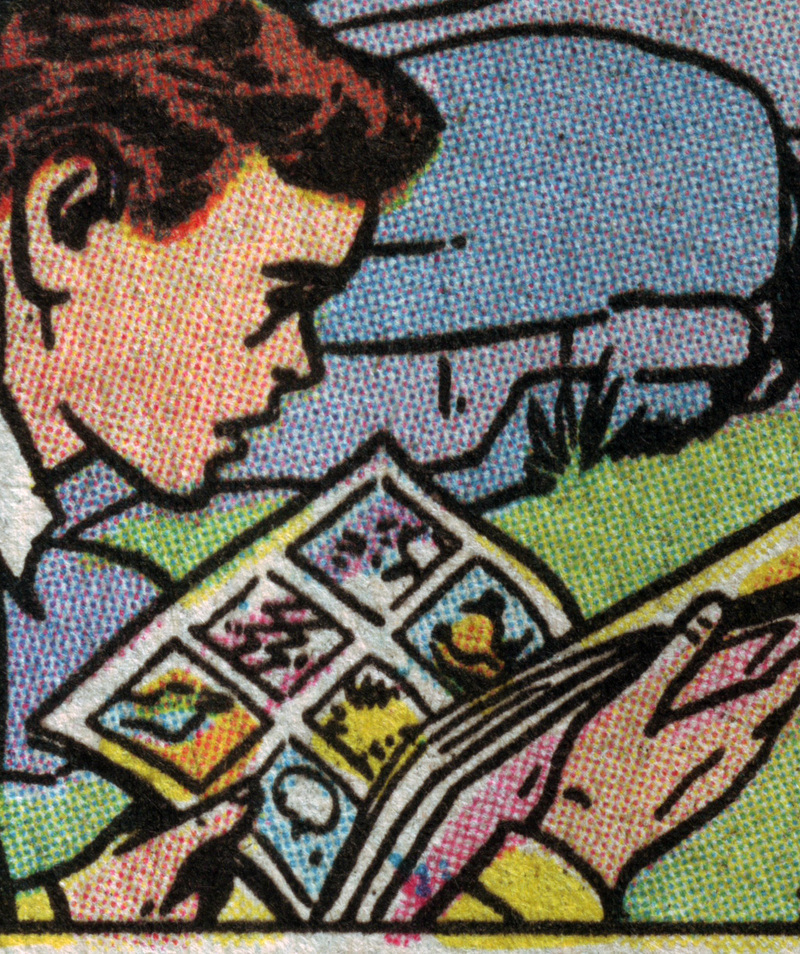 Why did you make the 4CP blog?

2. My favorite part of Blade Runner when I was a kid was the scene in which Harrison Ford’s character zooms infinitely into a photograph, looking for clues. That’s the scopophilic impulse that drives 4CP.

3. My account of what I learned from the 4CP project is here: In Defense of Dots.

Where do the comic books you’re scanning come from?

Most of my images come from a collection I amassed in the mid- to late-Seventies that sat in my parents’ house for 30 years. They left an indelible fingerprint on my adolescent brain, which looks exactly like the 4CP blog.

Can I use images from the blog for my own purposes?

Yes, of course. I'd love to see what you do with them.

How big is the printed area you scan for an image?

Most images are a small or very small fraction of a comic book frame. An inch by an inch-and-a-half might be typical, but some are much smaller and others contain almost the whole illustration in the source frame. This post may help you establish a sense of scale.

What’s the connection between 4CP and your earlier Comic Book Cartography blog?

There’s some sort of yin/yang connection between the two galleries: Comic Book Cartography documents the deliberate encoding of concentrated information, while 4CP documents the accidental creation of surplus information. CBC is comic books trying to rationalize their crazy world. On 4CP they just speak in tongues.

Why don’t you say more about the images you post?

My blogs are comics as non-sequential art. I’m compiling the places where the action stops – the diagrams and details that push back against the sweaty forward rush of clobberin’ time. One of the goals of 4CP’s spare visual presentation is to slow you down. The excessive mediating clutter of every experience these days has a distancing effect, encourages us to go faster, to consume more with less deliberation. We’re exposed to more things, and we can possess them instantly, but we get close to very few of them. The words, images, and page layouts we encounter in our daily lives are designed with the assumption that we have no time to spare and therefore that everything must be optimized for easy hit-and-run consumption. The minimalist approach of the 4CP blog is supposed to make you feel like you’re alone with something foreign in a quiet place. The images make no demands on you, other than refusing to explain themselves. You can sit down on a bench for a while or walk on, but wherever you go when you navigate away from 4CP, it will probably be louder and more crowded.

My name is John Hilgart. When I first engaged the insta-blog format, I had no interest in putting myself between the material and the audience, so I called myself Half-Man | Half-Static. Once the blogs attracted attention and I began writing about them occasionally, I was no longer anonymous.

Are you an artist?

I was formerly an English Professor. I am currently an ad man. I’ve always been engaged in some kind of visual art, but rarely in a sustained, systematic way. My creativity is largely reactive. Both of my formal professions depend on creative thinking that is prompted and bounded by inflexible parameters (e.g., a novel or a client situation). The creative process of 4CP is very similar; it’s an aesthetic pursuit based on an intuitive critical conversation with images that precede me.

I flip through comic books at odd times and bookmark pages where there’s a promising inch of material. When I’m in the mood, I’ll choose some of them to scan. Over time, I’ve gotten better about correctly identifying an image that’s going to work while it’s still on the comic book’s page. But it is always a process of reduction, of successive crops, and what gets posted is often a much simpler composition than the one I’d intended while scanning. Once they’re enlarged, you discover what they have to offer. You also realize how devastating any tiny fragment of unwanted material is to a composition’s integrity.

I’d say my aesthetics are hopelessly modernist. 4CP probably reveals as much about my love of Kandinsky and classic cinematography as it does about my love of old comic books and the appropriation of mechanical aesthetics. Pop art was the merger of high modernism and commercial modernism anyway. My visual sensibilities come from my 1960s-1970s childhood, the culture of my parents, and growing up in an arts-intensive city that experienced substantial growth in the 1950s and 1960s. There were a lot of Frank Lloyd Wright and Wright-derived homes in my neighborhood, and my grade school was a sprawling early-Sixties flat roof with an exterior design organized around colored rectangular panels.

What do you think about Roy Lichtenstein?

I like him a lot, but the perversity of his simulated enlargements of comic book details is that their precision negates what actually happens on the pages of 20th century comic books. Whereas chaos reigns on the craggy surface of wood pulp that has been blasted by successive printing plates, Lichtenstein is the Mondrian of comic book aesthetics. No matter how far from his dots you stand, you’ll never see green. He celebrated a mechanical precision and an idealized four-color process that the comic books never had.

I believe that in the ‘60s and ‘70s, Jack Kirby developed an opposing meta-aesthetic of comic books. He embraced the underlying chaotic, radioactive dots and force fields of the printed page, and he enlarged them into entire galaxies and negative zones. When the Fantastic Four dove into another dimension, they were diving into comic books themselves, shooting past four-color planetoids and through the wavy energy of bleedy black ink. Kirby’s cosmic crackles are benday dots that have gone supernova and collapsed into black holes.

Within Sixties fine art, I think Warhol’s screen prints are closer to the texture and visual experience of an enlarged bit of color process printing. It’s the calculated sloppiness of his work, as well as his dots. His coloring is painterly, not mechanical. His broad strokes are comparable to those of a comic book color separator’s brush, and he’s out of register when it suits him.  What’s great about cheap mechanical printing is that it doesn’t look mechanical when enlarged. It’s imprecise. It’s accidentally subjective. It’s full of gestures above and beyond those that were intended. That’s what makes it iconic. That’s why it’s hard to fake with computer design.

What does 4CP have to do with you marketing career?

There are no unchained melodies in the world of commercial persuasion: A must equal B. Words and pictures are entirely instrumental vehicles for an un-confusing message designed to create a specific, positive association. It’s semiotic algebra. 4CP is where I keep one foot planted on the Theodor Adorno and Walter Benjamin side of things, against identity. My images are advertisements for useless beauty, a rejection of instrumentality. At the same time they’re reminders of a lost industrial economy, featuring color separations by the citizens of Bridgeport, Connecticut and printing by the people of Sparta, Illinois. 4CP doesn’t celebrate auteurs so much as a historically situated form of human productivity.

What does 4CP have to do with your English professor career?

I’d like to think that the 4CP images walk a line between aesthetic autonomy and an inescapable embeddedness in their sources. In this respect, my favorite images feel the same to me as a certain kind of luminous, lyrical sentence that was typical of modernist fiction: Raymond Chandler’s startling metaphors. F. Scott Fitzgerald’s voyeuristic idealizing. Willa Cather’s elegiac loneliness.

Their novels were often about powerlessness, loss, and the colonization of subjectivity by culture’s dominant ideologies – but the little imagist jewels they set into their prose created pockets of autonomy and transcendence, dialectical fractures. These are the moments when truth and beauty are achieved simultaneously, even though the truth almost inevitably sucks. They’re buried in the complicated social mire of a novel, among thousands of other sentences. They can’t quite escape, but they try.

This predicament is why I prefer fiction to poetry; the poetics I find most transcendent are inside prose. My aesthetic synesthesia connects that kind of trapped, fluttering sentence to the images I extract from comic books. Rick Moody’s new novel includes a great one: A wind was blowing up outside, broadcasting widely the dust and detritus of the post-imperial desert. In my dreams, Moody wrote that as a blurb for 4CP.